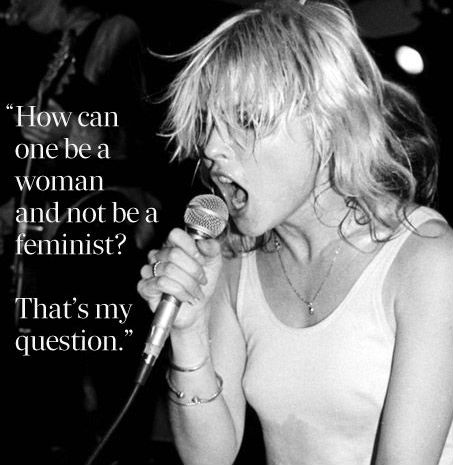 I've been thinking lately about the use of the F word and how even in the current socio-political climate so few people would classify themselves as feminists. Even though most females experience everyday sexism, whether it be in the work place, the home, in education, in relationship or legally there is still this taboo surrounding the word feminism. The latest survey carried out in the UK, showed that only 7% of us identify ourselves as feminist, yet over two thirds support gender equality.  What's more is the amount of people who believe in equality has actually risen from previous records, whilst the amount that identify themselves as feminist has nose dived. So why is this? Whats the difference? To be clear, the literal definition of feminism is; the theory of the political, economic, and social equality of the sexes. So why, in a time where equality is on the up, has feminism become a dirty word that people don't want to associate themselves with?

I've recently come to realise this disassociation has stemmed from the fact the word itself has been construed and interpreted in so many different ways that the meaning has become demonised. Those who speak the loudest or are most controversial have polarised the meaning; marginalising rational discussion and moderate approaches in favour of a narrow minded movement that vilifies men and victimises women. This is turn gives room for those with far-right ideas to trivialise and belittle it, taking some opinions to be all opinions and using that as a vehicle to condemn the whole subject of feminism.

However, it's important not to get tied up in semantics and understand the true meaning of the word. Its about equality of the sexes; a utopia that we have not yet reached, not by a long shot. Saying that, apparently a pretty big chunk think it we have; 9% of the UK actually think Feminism is irrelevant and 4% don't know what it is full stop. For those people, here are some really basic examples of the inequality that exists in the UK and worldwide today:

If the above doesn't resonate with you, here are some examples of the everyday sexism I have experienced, I'm sure you'll see similarities to your own experiences:

As a feminist, I know that you cant generalised about a whole sex based on the actions of a few and wanting to be equal to men doesn't mean you want to be better than men. Like many i'm sure, some of the best people in my life are men, I mean my dad is pretty much my best friend, I think my boyfriend is pretty awesome and my two brothers, well they are ace too. That is where the demonisation of feminism comes from, the apparent male-bashing, but it needs to be acknowledged that feminism does not advocate sexism towards men but only asks to be treated on a level playing field as men. Yes there are incidents where men (and women) are sexist, and its crucial that they are called out on that, but that by no means allows for anyone to tarnish a whole sex with the same brush.

My point here is we need to not get so caught up with the word. A word cant affect change. The meaning and movement behind it can. Gender is a social construct that puts men and women on different sides of the table, they are told they have different ambitions, dreams and different roles to fill. Things are masculine or feminine, its socially acceptable for men to do one thing but not for a women too, and vice versa. But gender is a spectrum, its fluid, not two halves of a circle. I as a women may have a lot much more in common with a male friend than I do with a female; just because i'm a women it doesn't mean i'm automatically going to identify with other women all the time.

So do we need a new word? No we don't. Whether you call yourself a feminist or not, the conversation is not about the word. The word is not important, the idea and belief behind the word is whats important. What defines us is who we are, not a static word that can be interpreted and construed in many different ways. I want to live in a world where both men and women are free to be emotional, to be strong, to be leaders and until that exists for all, the conversation isn't over.