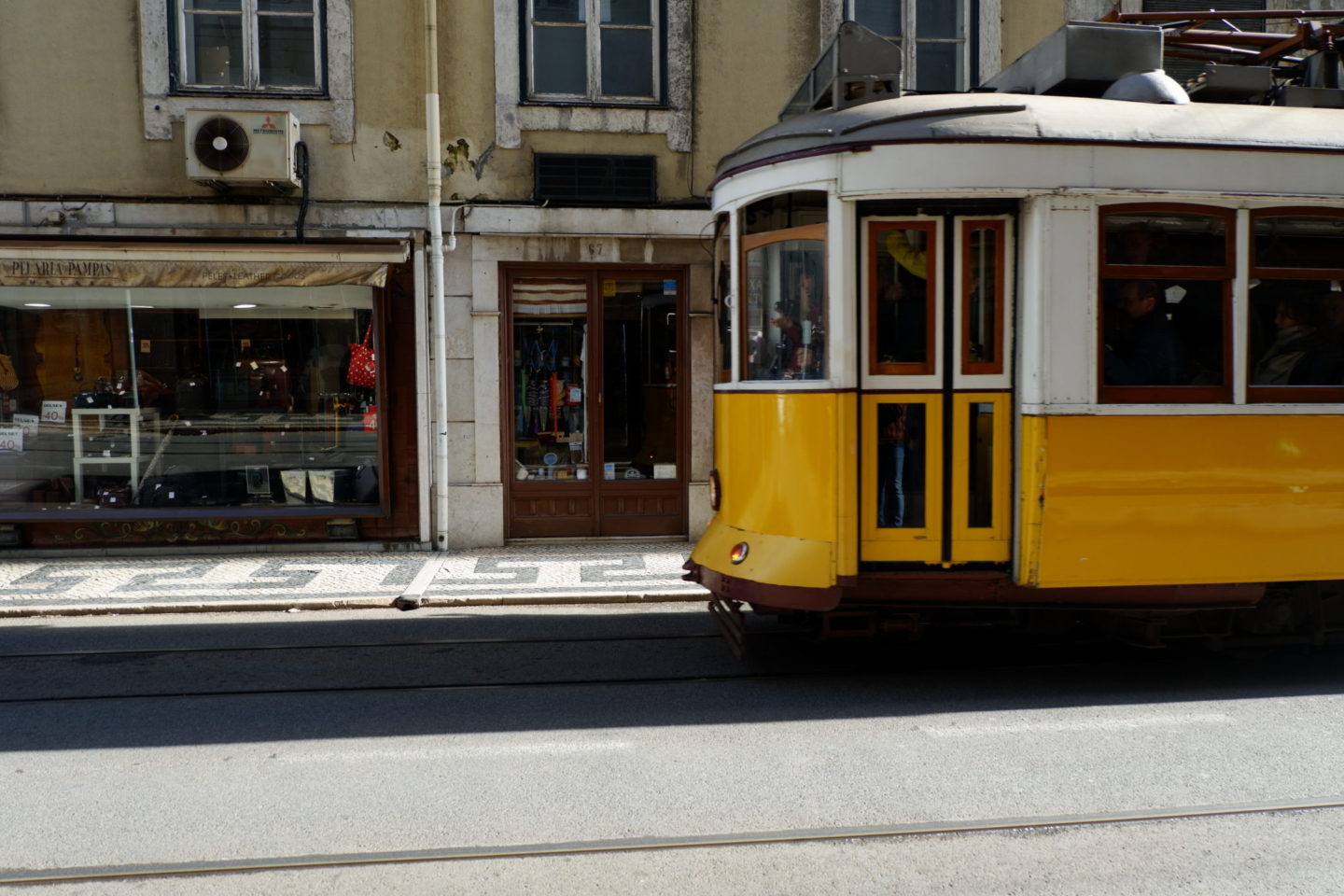 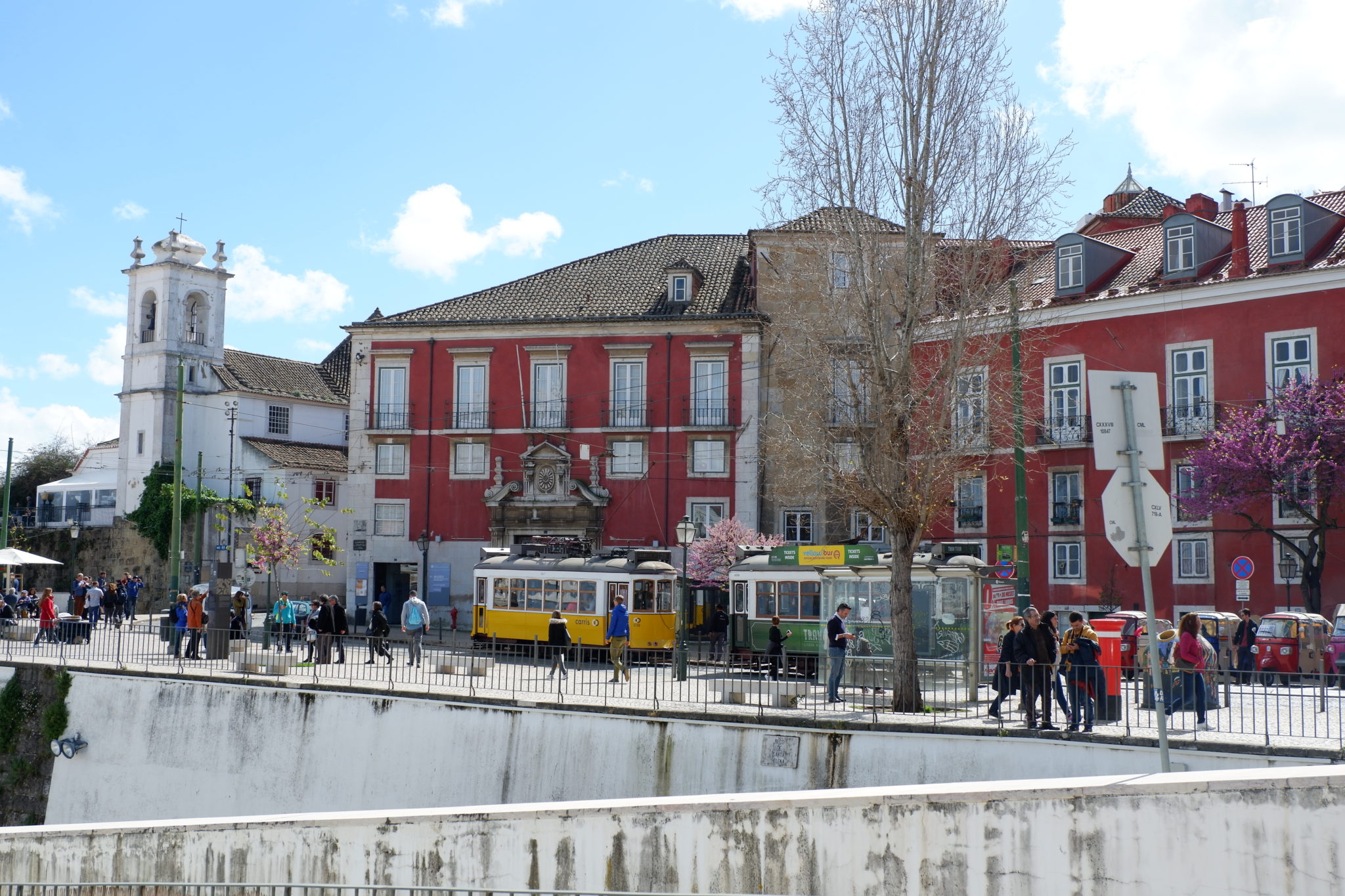 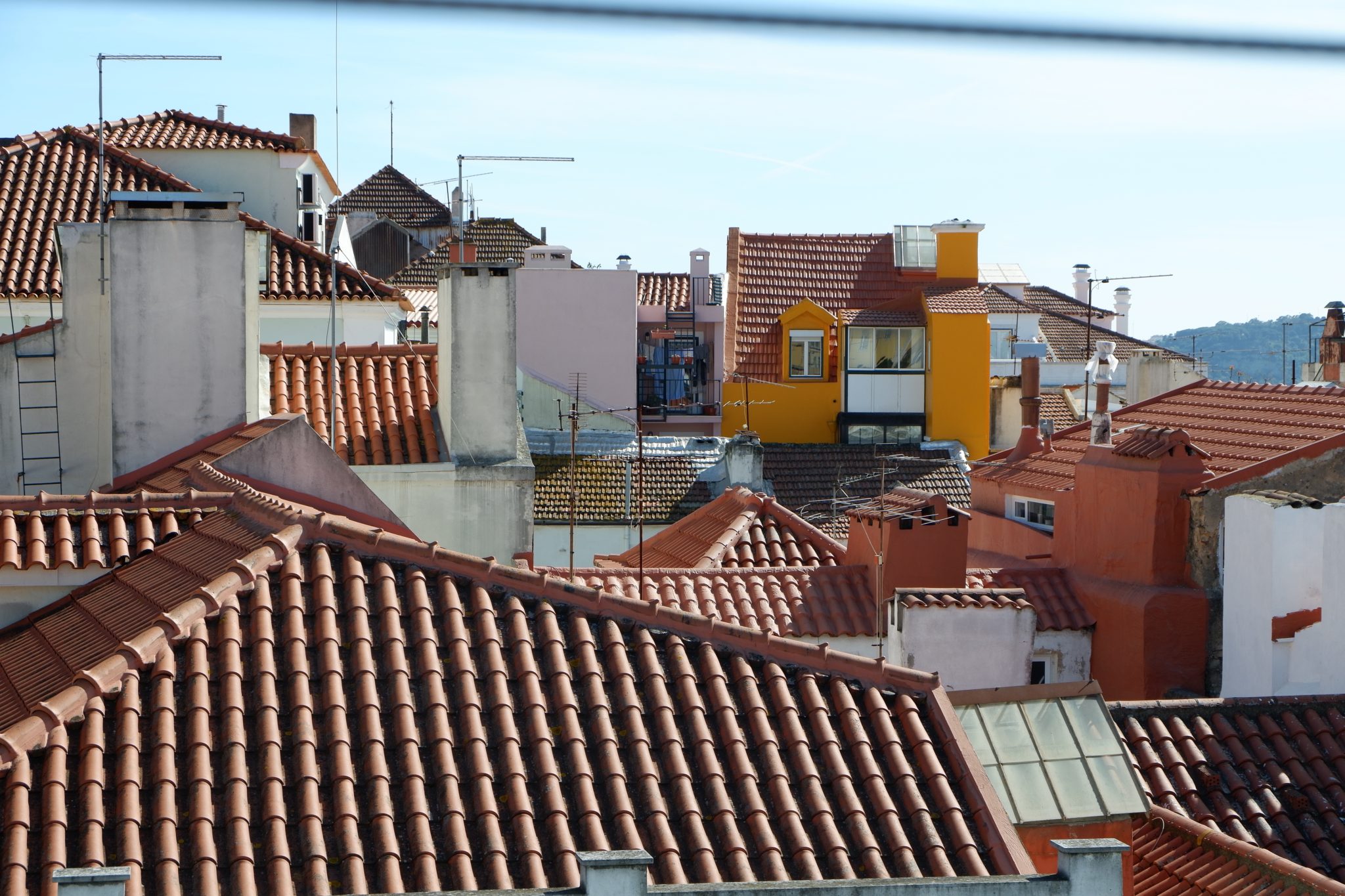 Its a bit of a running joke between me and my boyfriend that literally every time we visit a new city I immediately fall in love with it, claim its my favourite place ever and subsequently try to convince him to elope there asap. And of course Lisbon was no exception. Except I actually, definitely, 100%, no word of a lie do want to elope there!

To say I fell head over heels in love with this city is an understatement. It's exactly my kind of place with it's laid back, unpretentious, unassumingly cool charm. It's not flashy, it doesn't pretend to be something its not and it fully embraces it's rich culture and history which to me is the epitome of cool.

Its chilled, eclectic vibes are a nod to its rich history and diverse culture. They say Lisbon is a city populated by foreigners, in that few of its residents actually originate from there. It's culture is an amalgamation of foreign influences that you can trace back in time; it's the second oldest city in Europe after Athens; it was invaded and ruled by both the Moors and Romans, which is ever present in it's picturesque Moorish architecture. It was then capital of the most powerful and rich nation in the world during the Portuguese expeditions and was then subject to the longest-lived dictatorships in Western Europe which latest till the mid 70s.

After joining the EU in the 80s it received massive funding to restore it to its former glory (big up the EU). This turbulent and colourful history is so inherent in the feel of the city and has only made the place and people more interesting and unique.

To me the only way to see a city, is to eat your way around it, and we certainly did just that. The food scene is hands down one of the best I've experienced in Europe, with so much great food so assessable, you're are almost spoilt for choice and although there are 24 michelin star restaurants in Lisbon, you don't have to break the bank to get a taste of the buzzing food scene.

With that in mind, this post is the first of a two-parter and is predominantly focussed around some of the great places we ate in Lisbon. 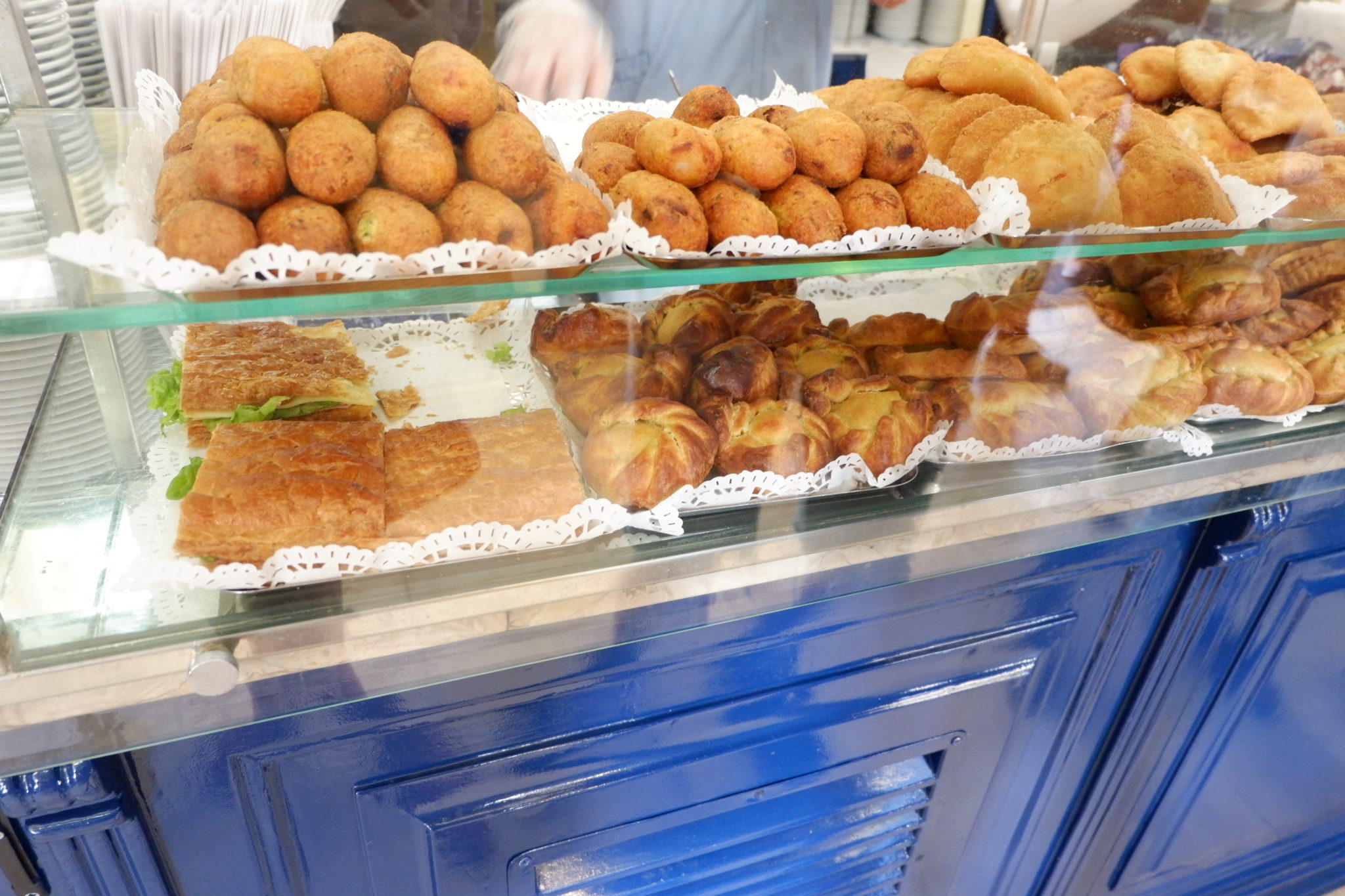 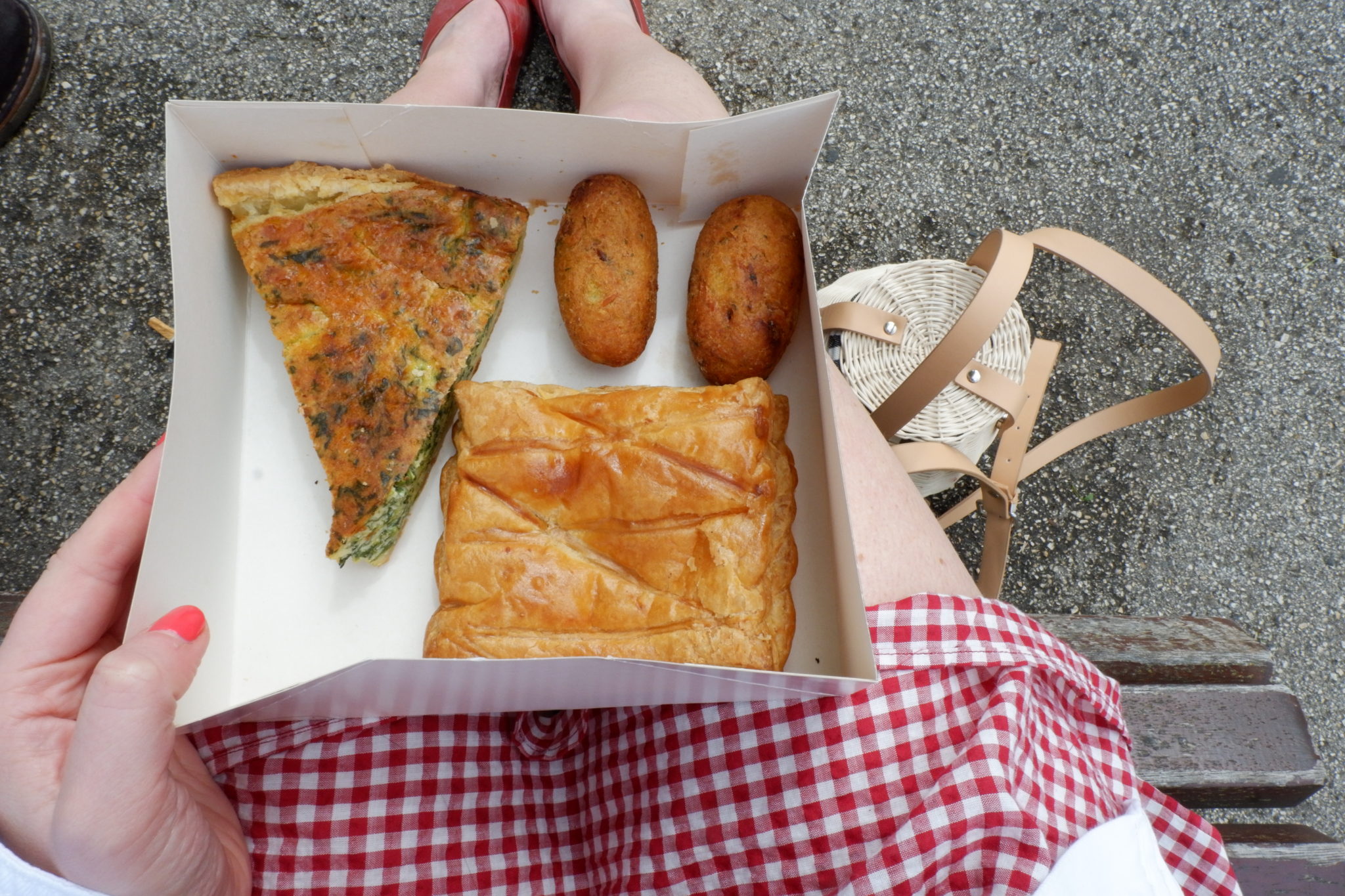 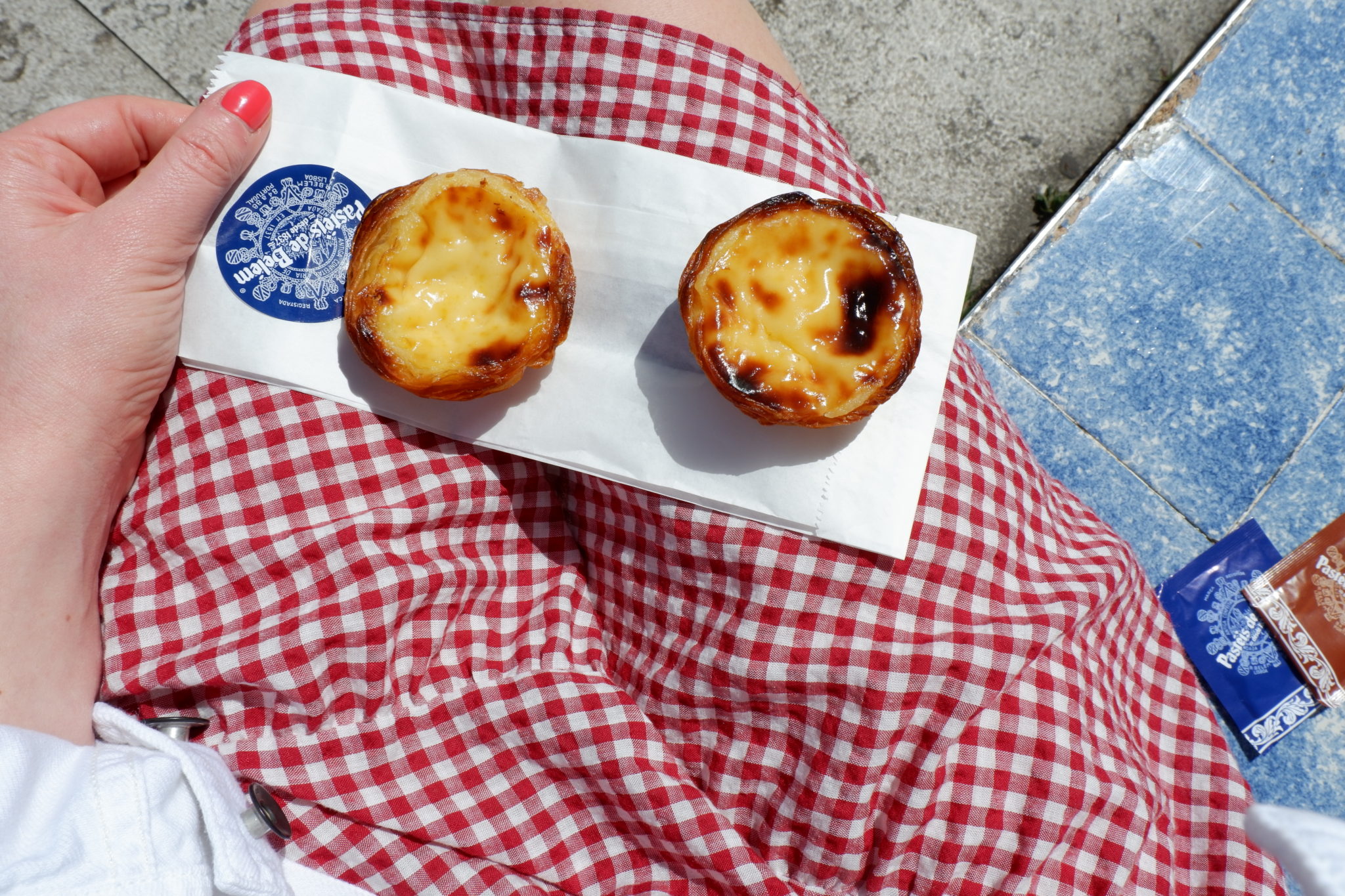 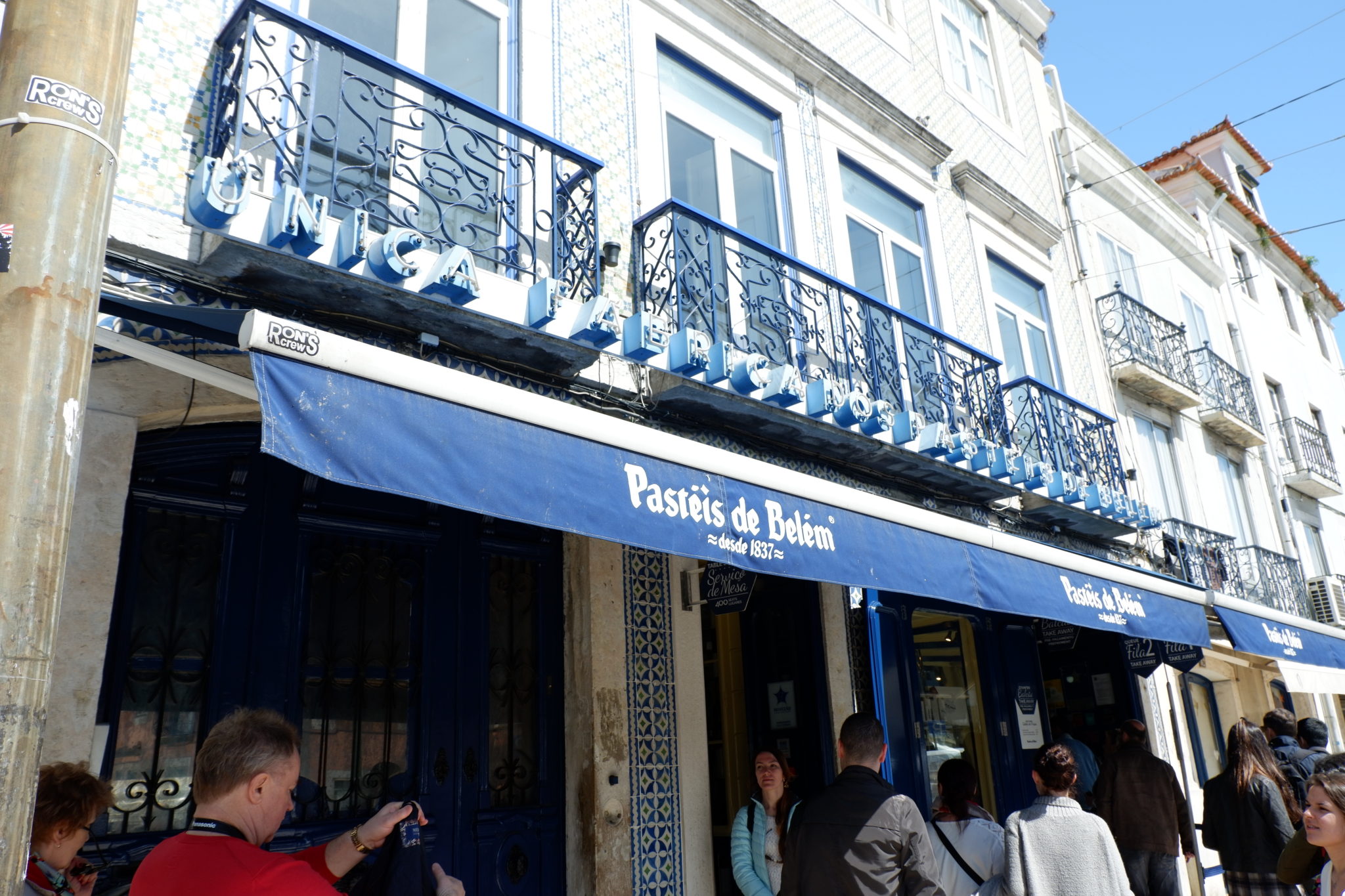 Famous for it's tower on the sea (and it's custard tarts), Balem, a 20 minute Tram ride (or 50 minute walk) from the centre of Lisbon, is a must-visit. Predominately because it's home to Pasteis de Balem, the bakery in which the infamous Pastel de Nata was conceived. Serving up the same recipe since 1837 the bakery was packed with tourists and after tasting their version of the Portuguese sweat treat I can see why. We ate MANY a Pastel de Nata in Lisbon and I can honestly say these were the best. Enjoyed warm straight from the oven with the exact right amount of crispy around the edges and caramelised on top they were totally delicious. I am not a huge fan of these types of dessert normally as I hate that eggy taste you get when they're not cooked long enough, however, I could have gorged on these beauties all day long. We also bought a selection box of savoury baked goods (classic us), the spinach quiche was yum as were Pasteis de Bacalhau (salted cod croquets).

The town of Belem itself is beautiful, with lots of nice places to eat and drink, as well as the stunning (and bright pink) Belém Palace and of course the eerie fortified tower of Belém on the edge of the estuary. It also boasts a Millennial pink McDonalds.. v. instagramable. 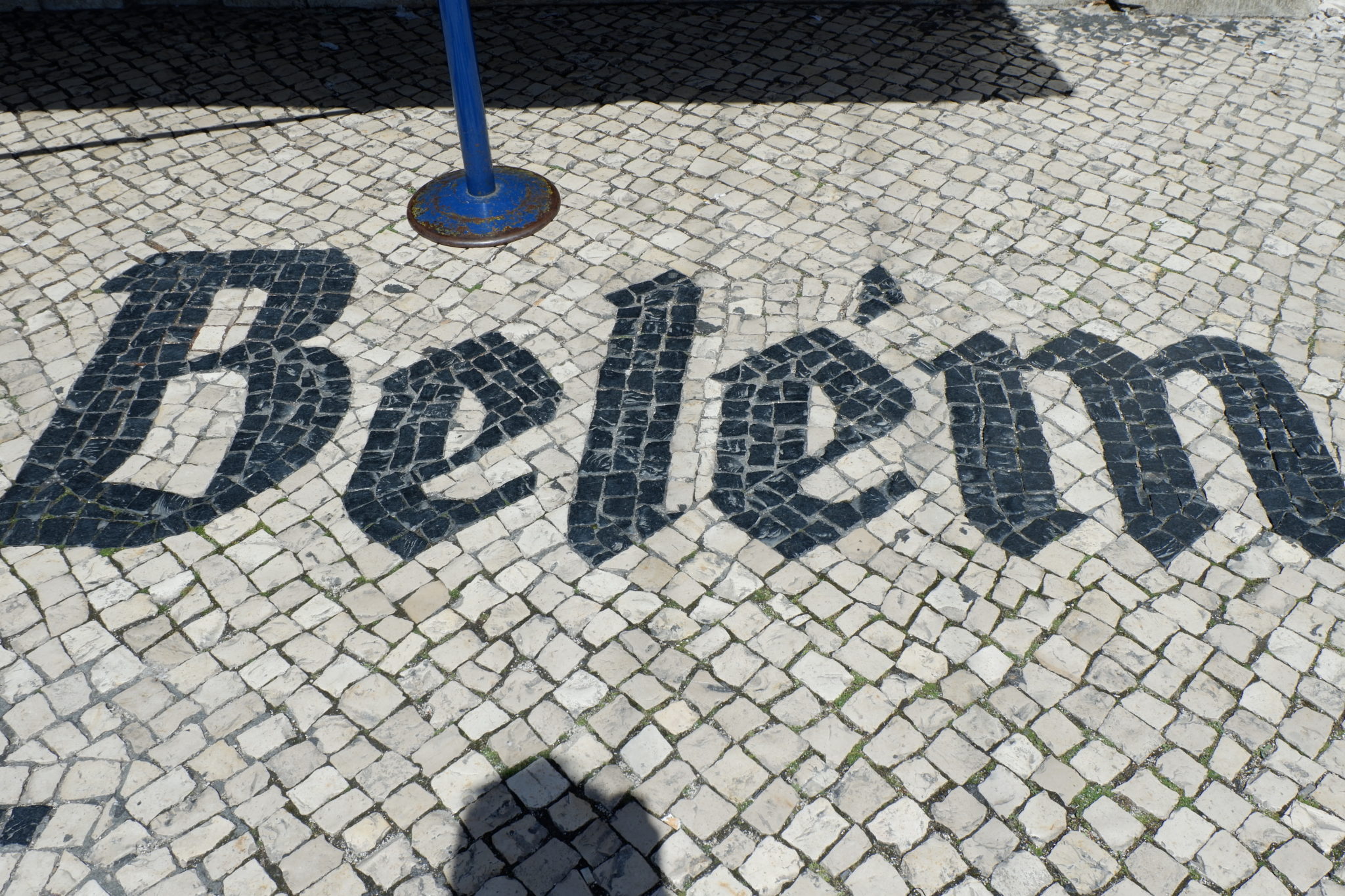 Every city should have a market like this. I've frequented lots of food markets in my time (obvs) but nothing as nice as this one. There are 34 stalls, if you can even call them that, they're actually more like pop-up restaurants. Each has a different (and delicious) concept but all with one common goal – to promote Portuguese produce.

This is the place to go to sample some of the finest food Lisbon has to offer, in piece-meal quantities and for a fraction of the price. At the top end of the market you'll find a row of 'Cozinha de Chef' aka chefs kitchen. This is where you'll find concepts from the top chefs in Lisbon. We took two turns around the hall before settling down with a cocktail and a beer to discuss what we'd try first. It was a tough call but we went for delicious Sardinas on sourdough and a traditional Portuguese chicken gizzard stew from Alexandre Silva, three croquettas from Croqueteria and the Portuguese take on the steak sandwich, the Prego from O Prego da Peixaria (just a modest meal then...). Oh and I finished it off with a vanilla cheese cake slice from Nós é mais bolos. 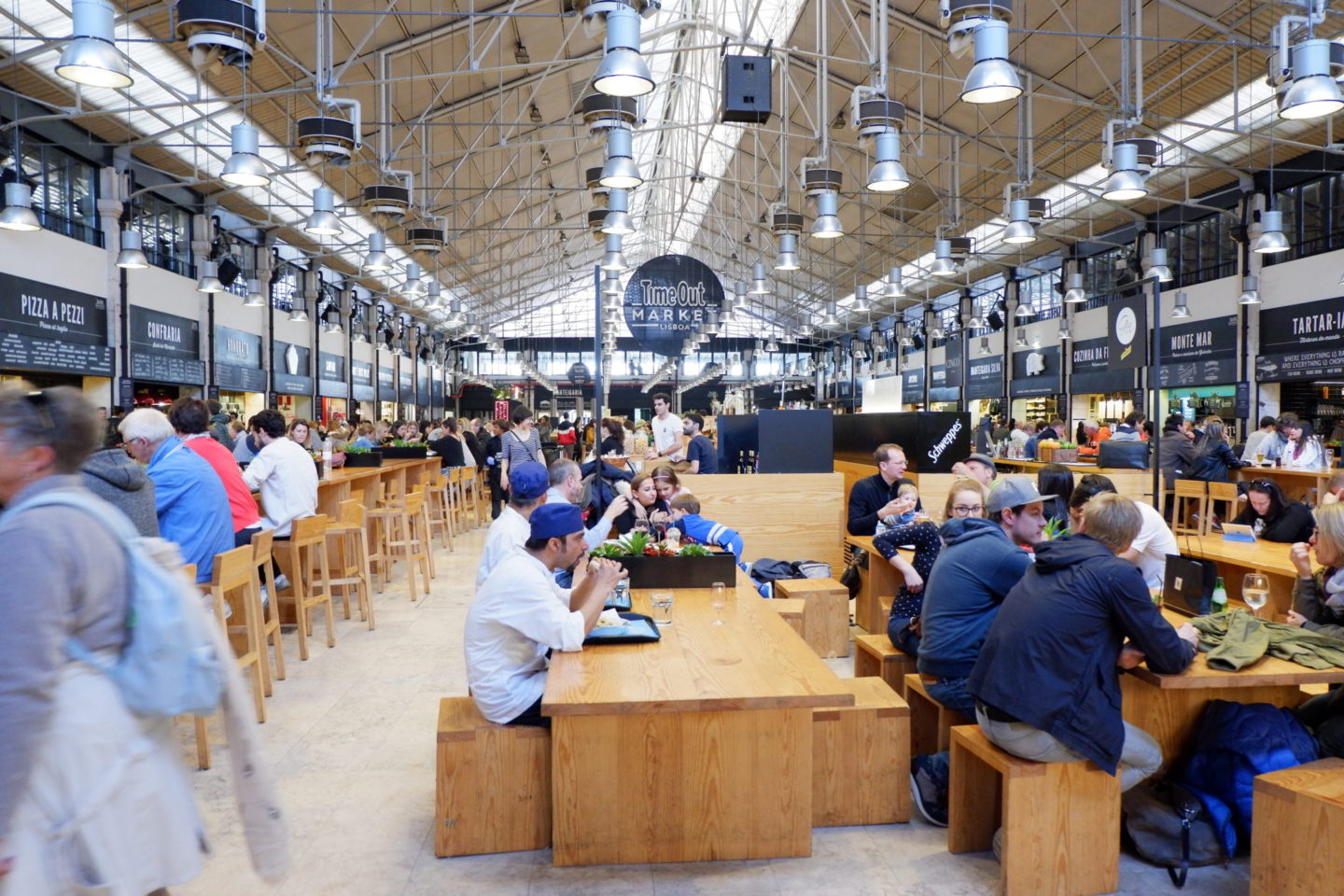 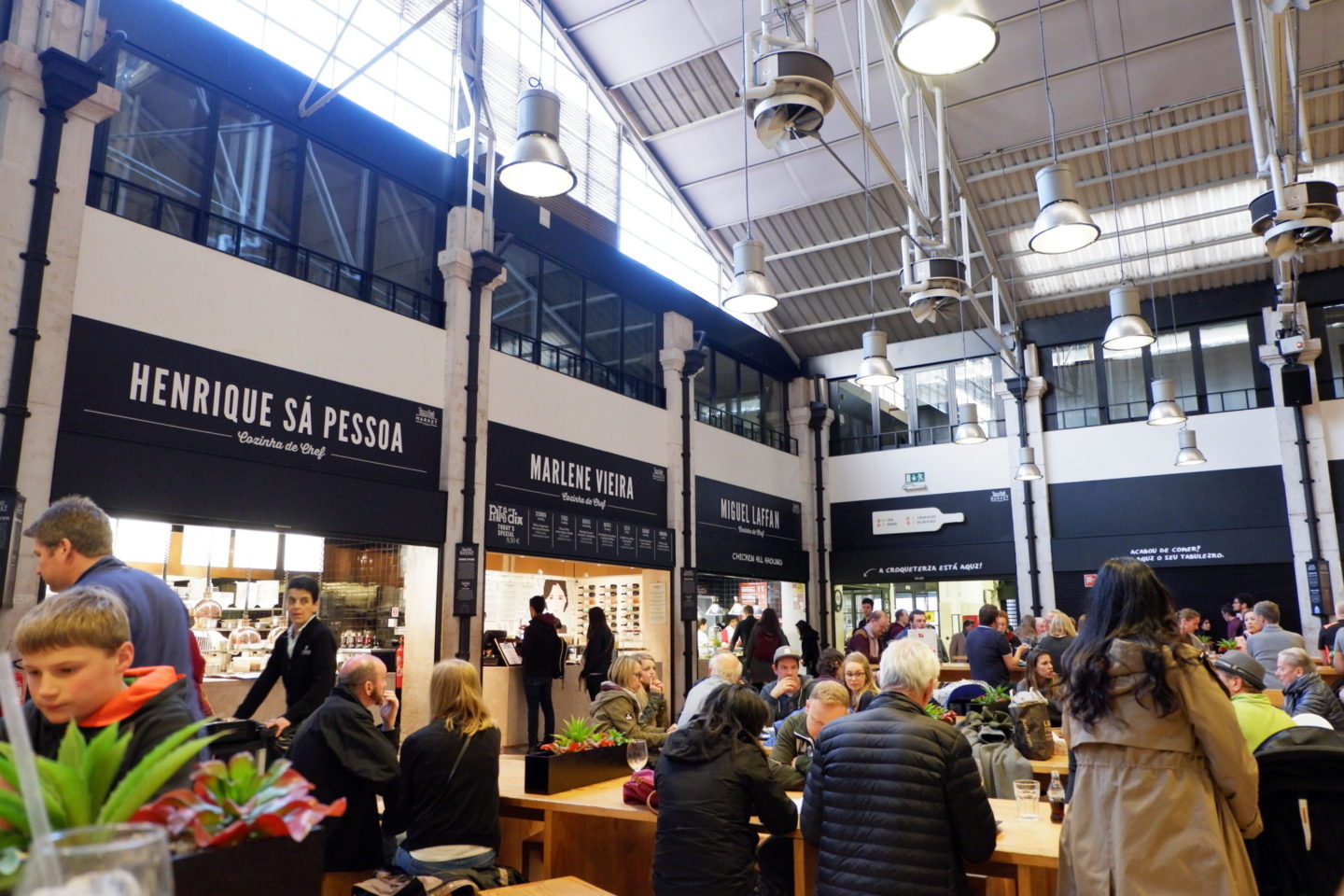 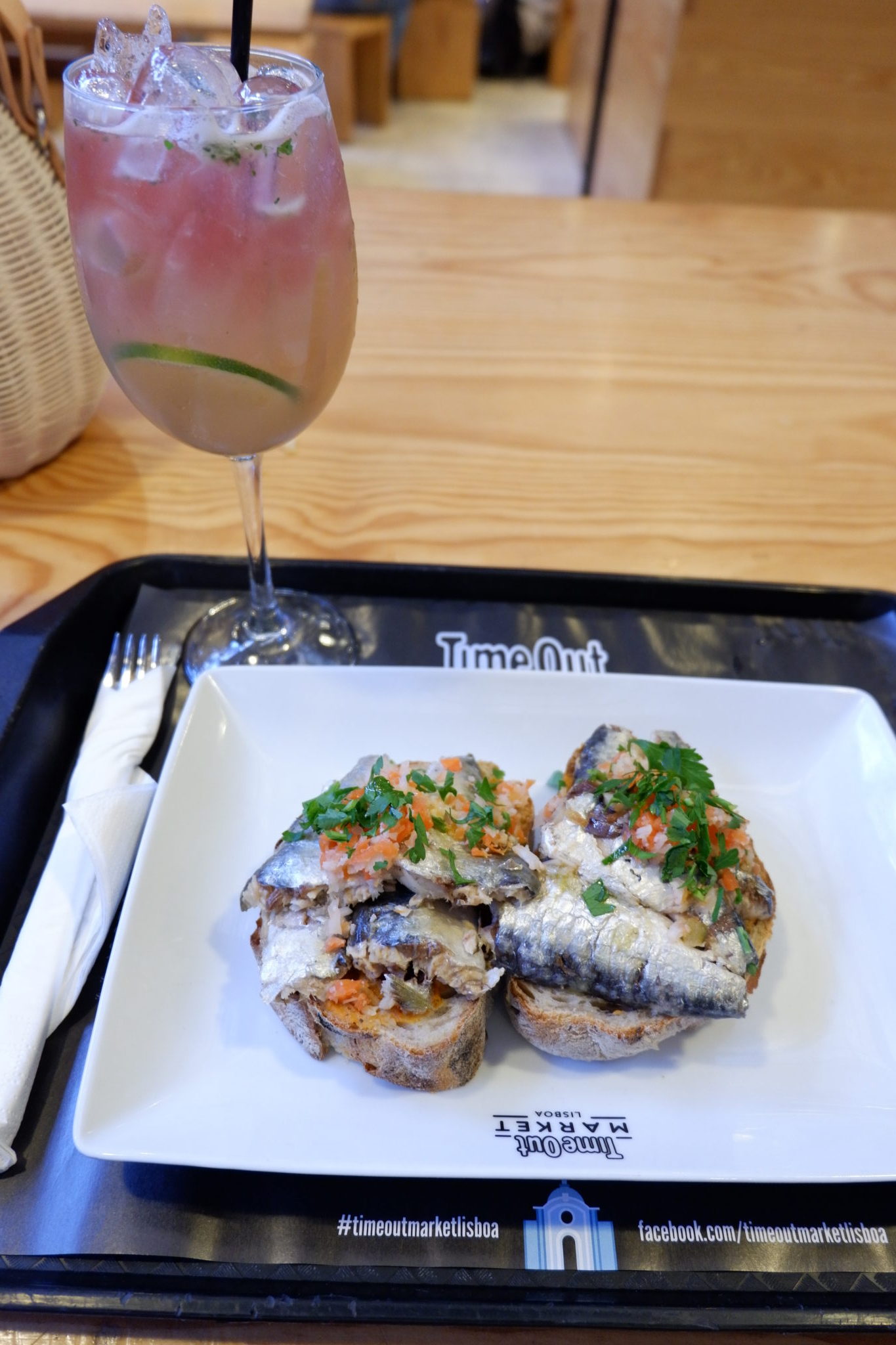 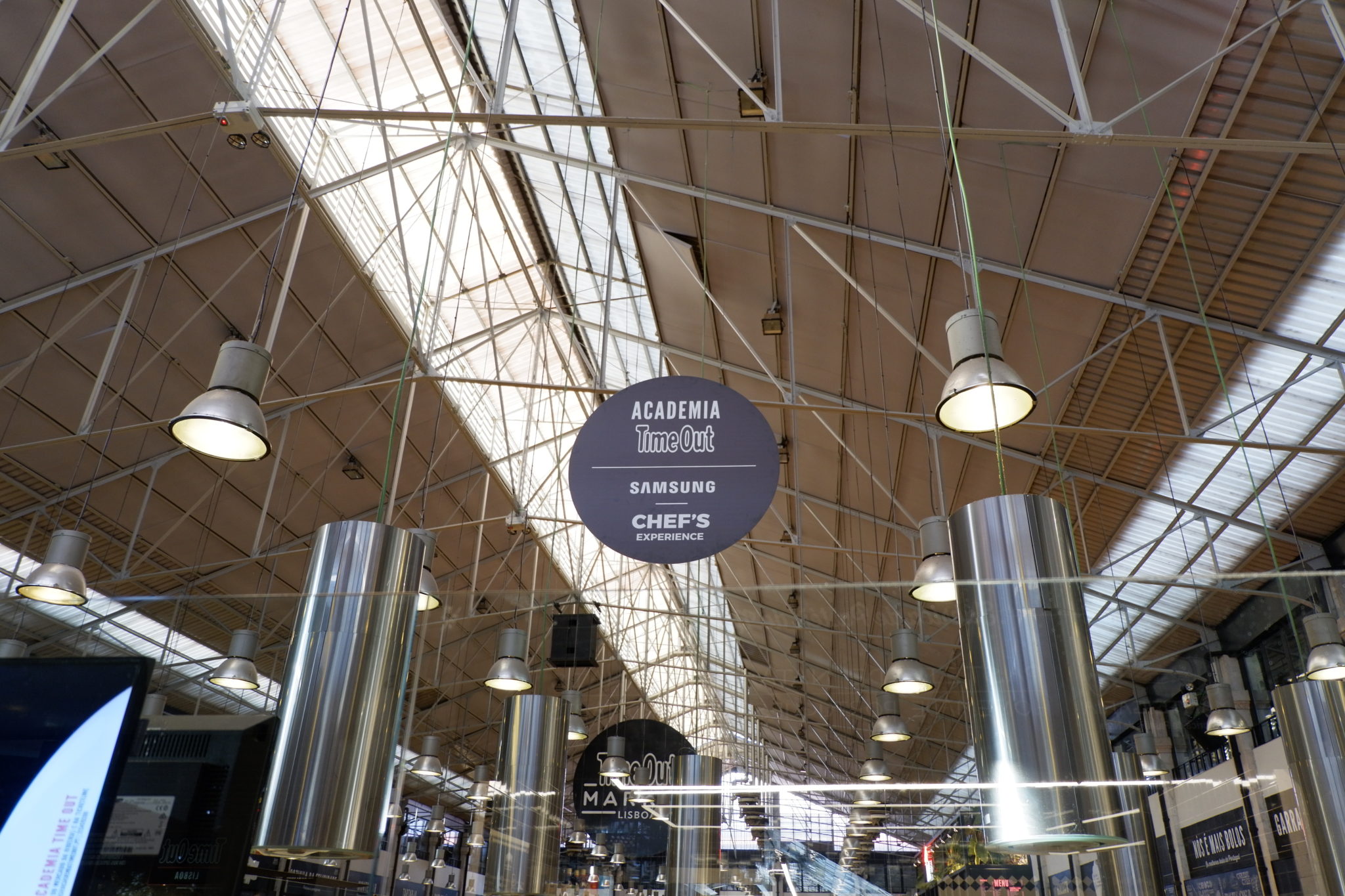 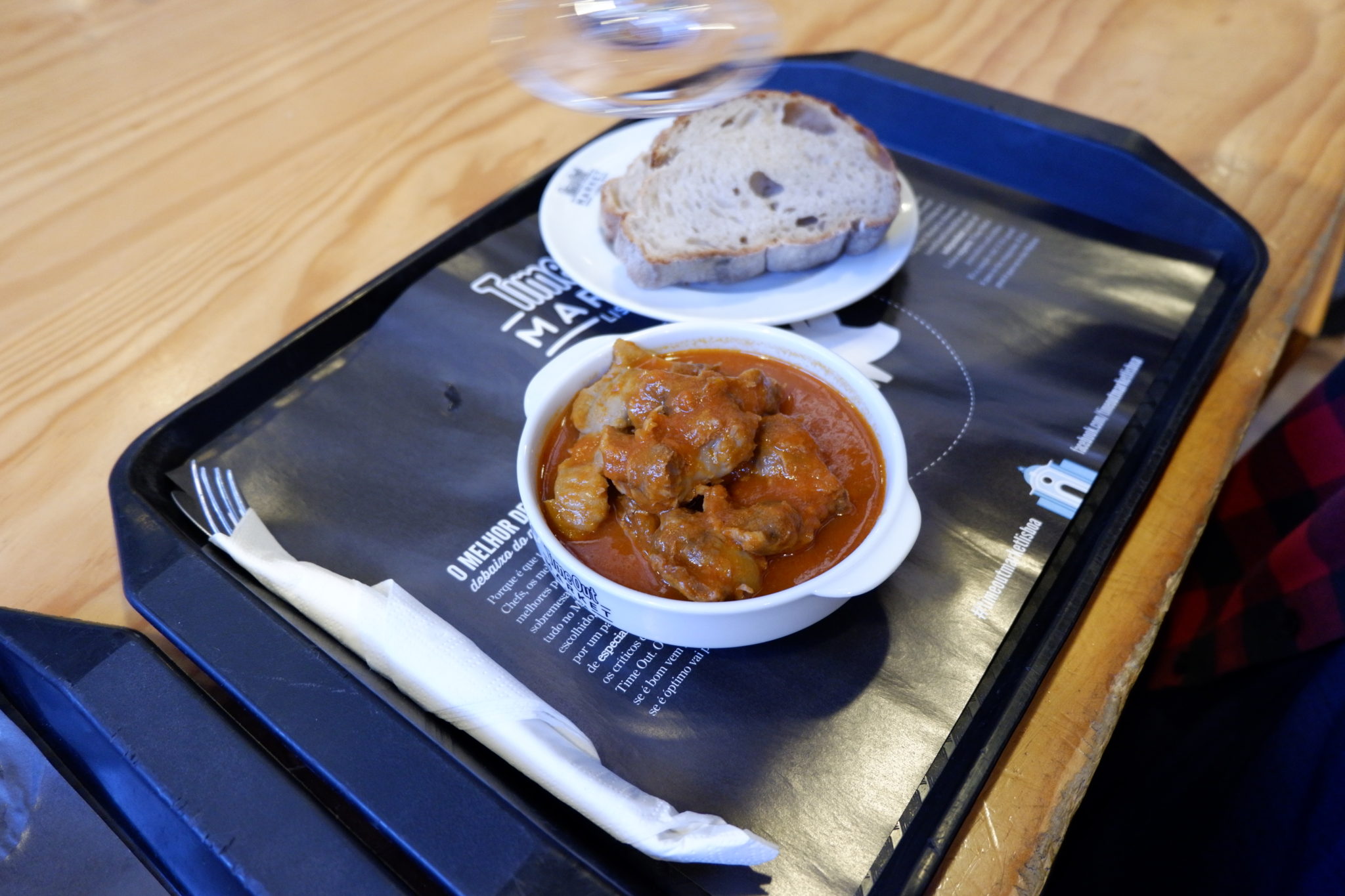 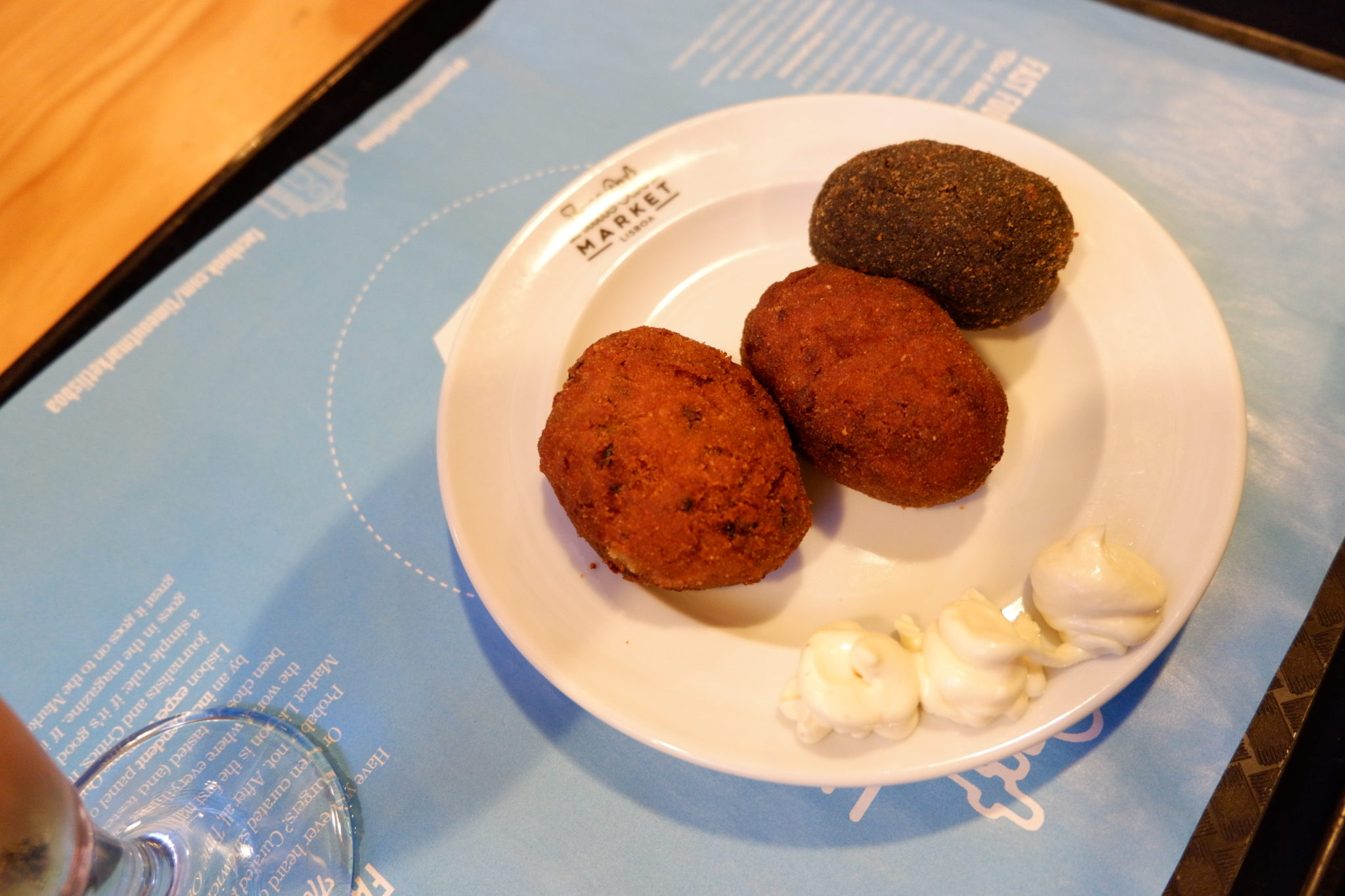 Croquettas from Croqueteria, the cuttle-fish squid ink croquet is a must-try (far right)

The absolute dream spot. Think the Bussey building but with wall-to-wall sunshine and a view of the beautiful orange roof tops of Lisbon. This bar is built on top of a multi-story car park in the heart of Barrio Alto. With Lisbon being built on 7 hills, spots like this make for perfect viewing opportunities. We sat here for hours before our evening flight home, soaking up the sunshine and enjoying their delicious cocktails and meat platters. It's a perfect place for a chilled afternoon in the sunshine, they also have a cool indoor space for when the weather isn't so good but you still want to enjoy the view. 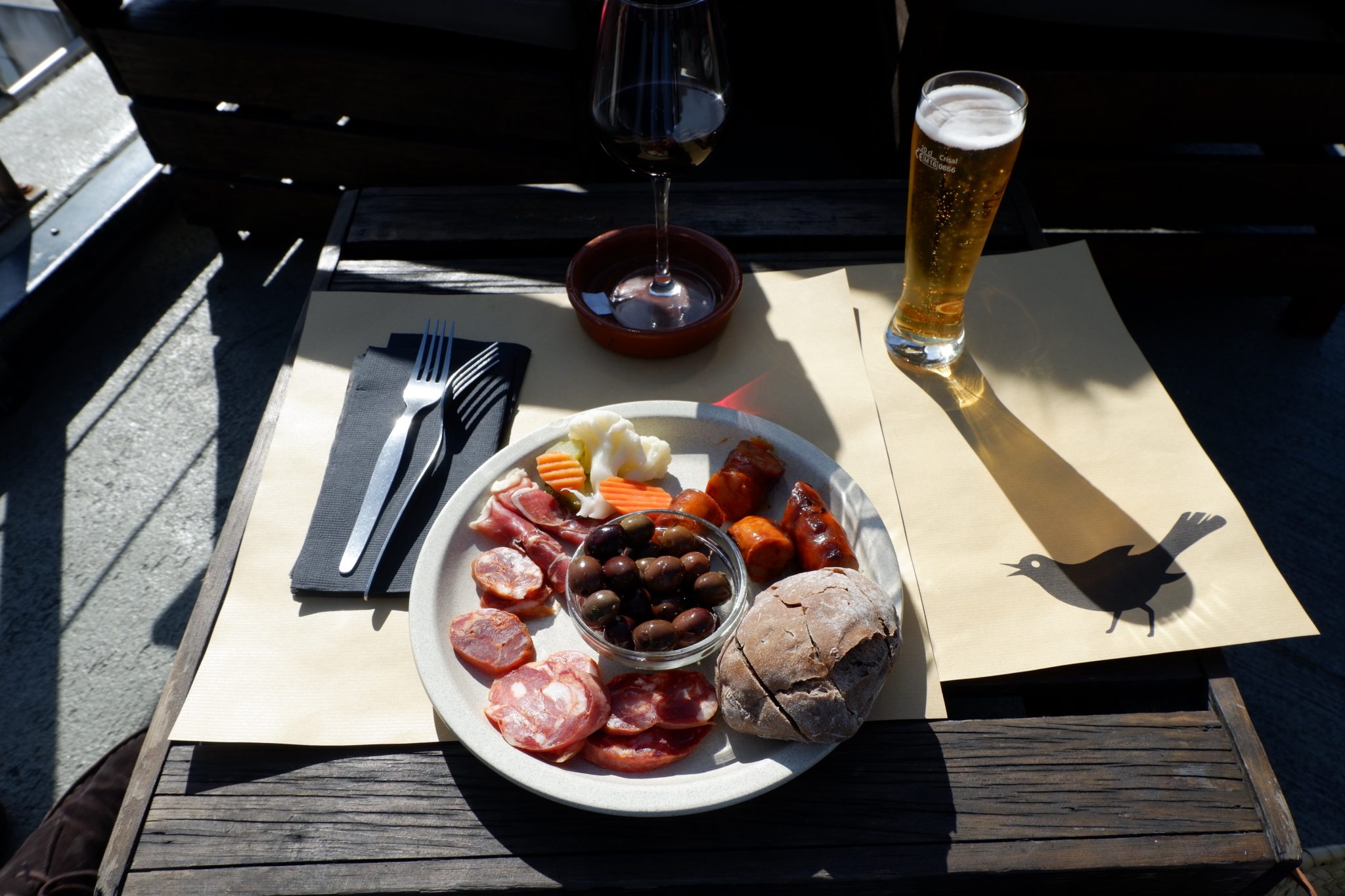 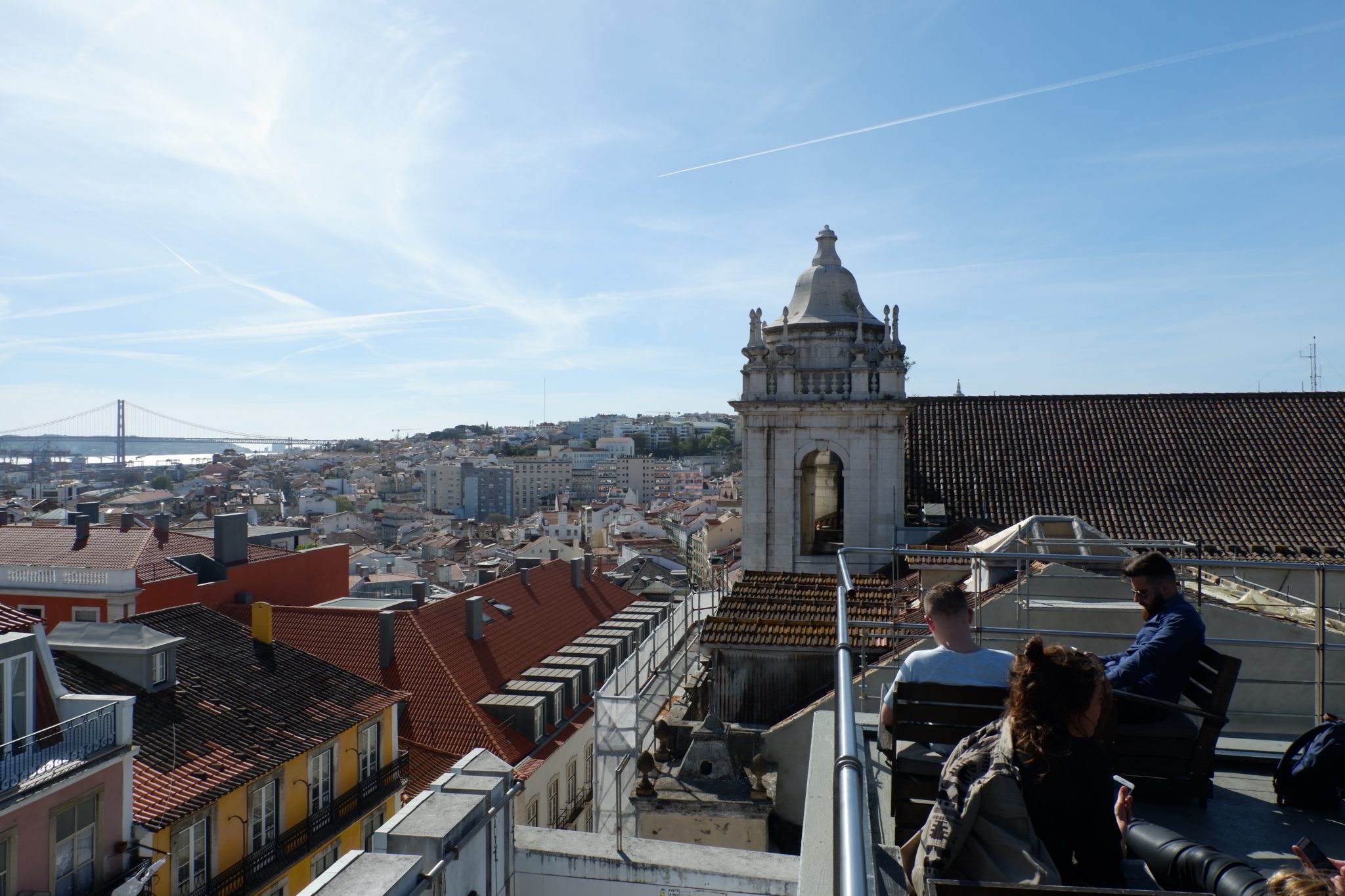 The iconic Santini is the most famous ice cream vendor in Portugal and has been serving up delicious frozen goods in it's cheerful parlours since 1949. We visited the store in Chiado shopping district but they also have a pop-up in the Time Out market if you want to sample some of their delicious flavours. You'll find the daily flavours on a chalk board on the wall, ranging from the classics such as chocolate and pistachio to flavours made with real fruit, like passion fruit and raspberry. They even had some unusual flavours like marzipan and coffee bean and one made with egg yolk thats apparently delicious (unsure...) 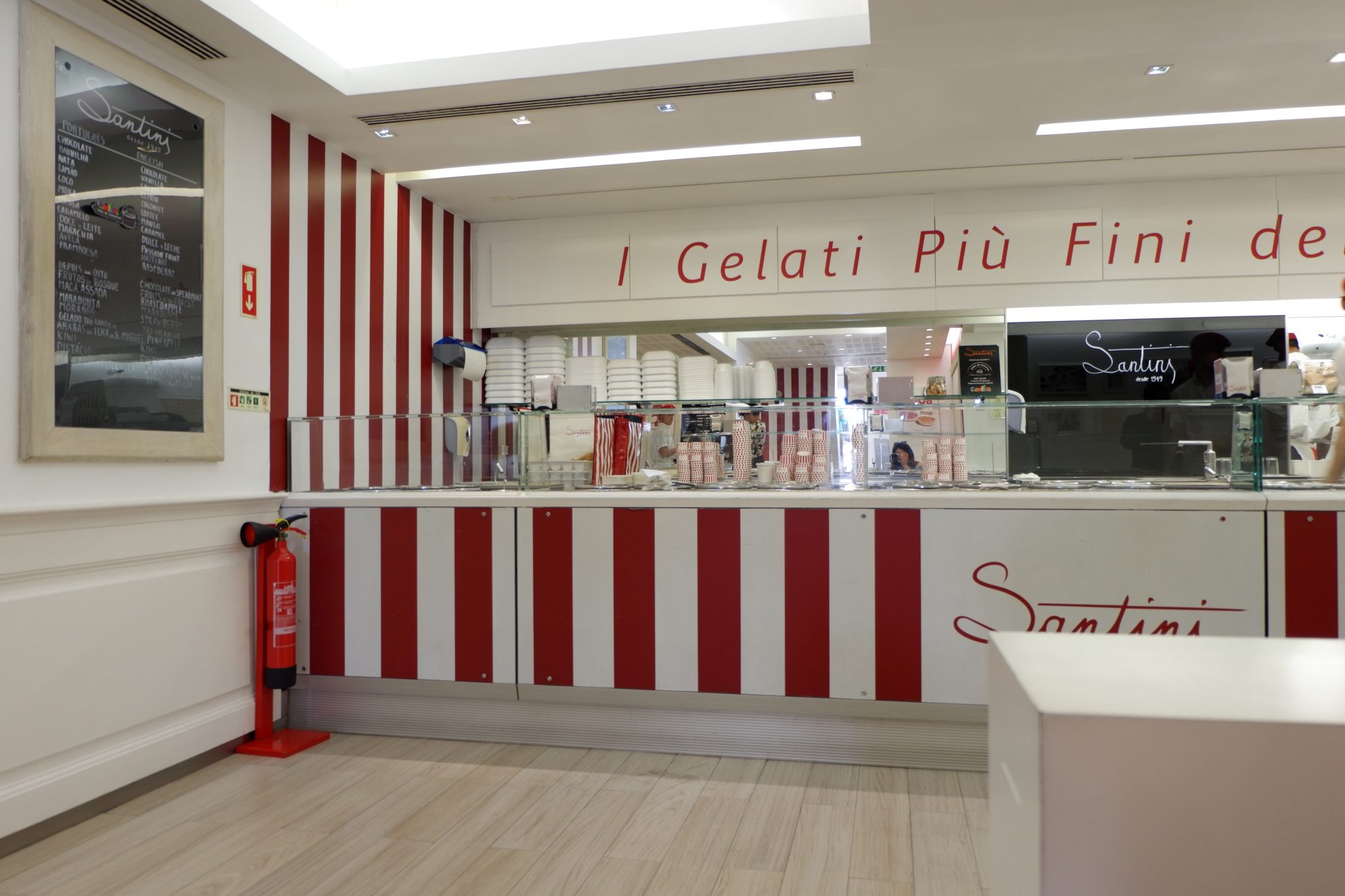 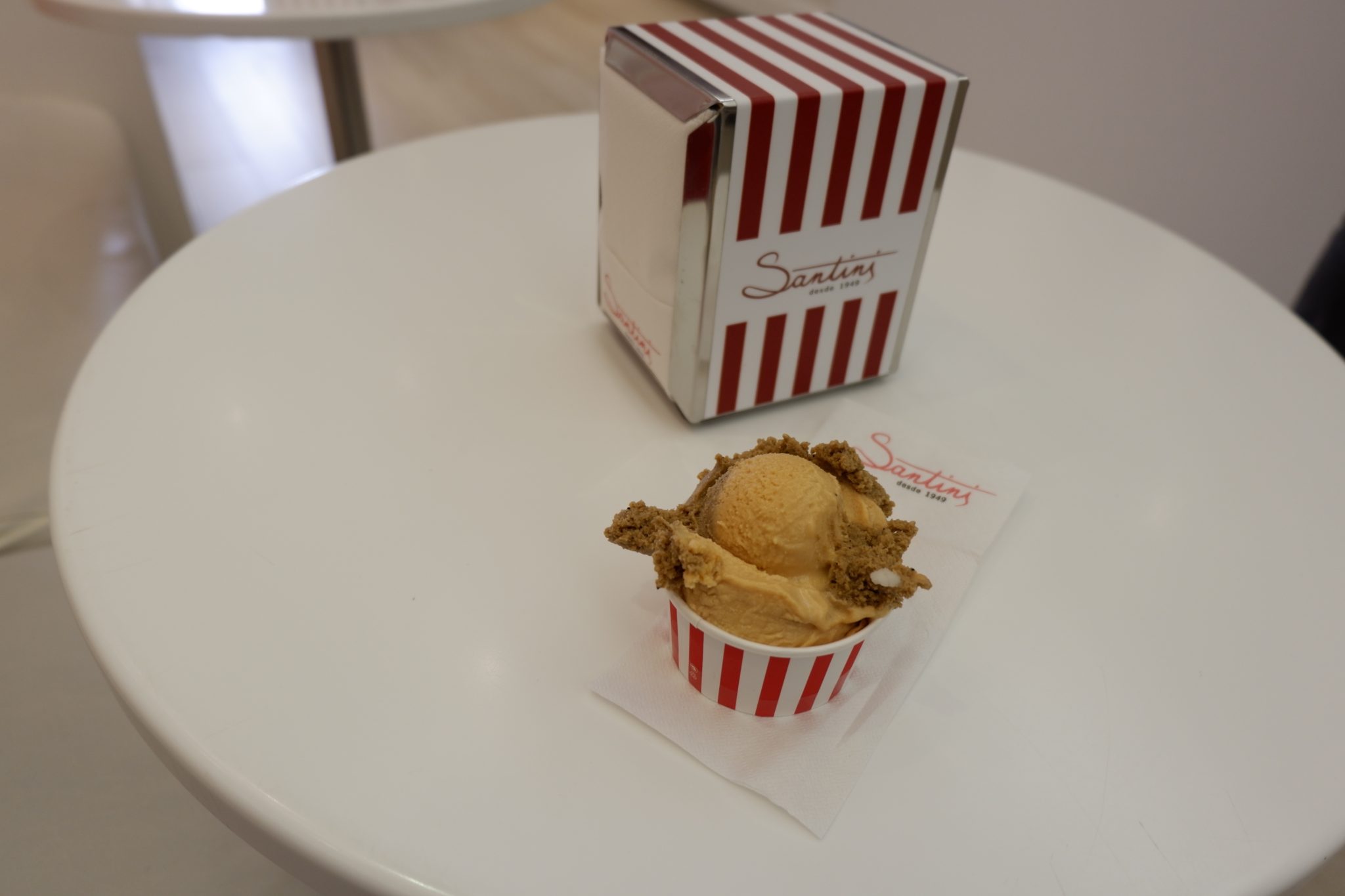 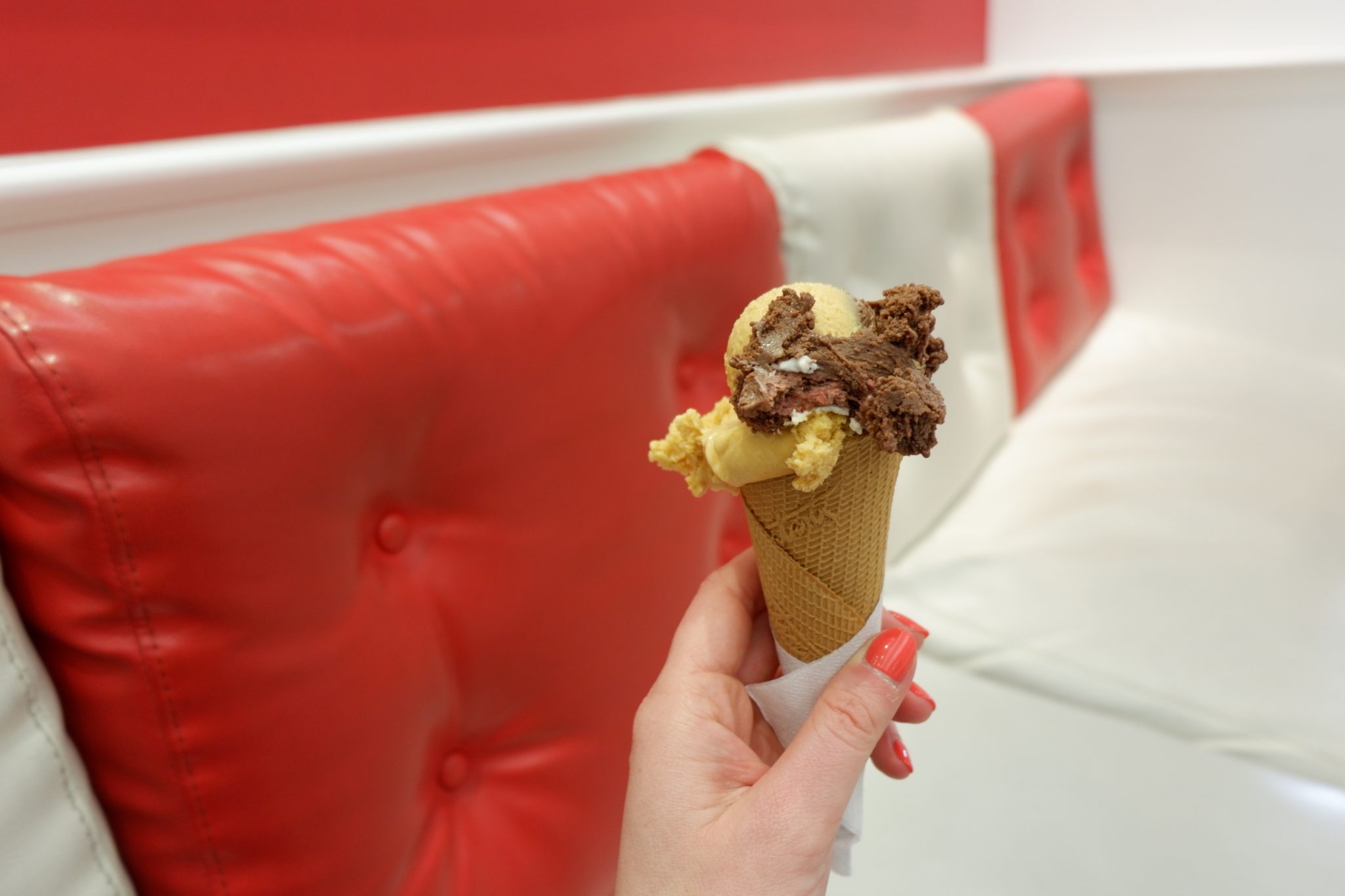 We stayed just off Santa Catarina in a lovely boutique hotel called Monte Belvedere which is part of the Shiadu group of boutique hotels.

The hotel itself was lovely and the staff were really friendly and helpful, all speaking perfect English. They served an amazing breakfast spread up on their rooftop restaurant which at night was transformed into Madame Petisca Restaurant. We ate here on the first night having arrived quite late and expecting to be able to get a table instantly thinking only hotel guests would be dining there. Although luckily they did have a table available, it was super busy and full of non-hotel guest so I definitely recommend booking. The restaurant boasts a super relaxed atmosphere with floor-to-ceiling windows and a terrace with water views, the perfect place to watch the sun set whilst enjoying delicious tapas and cocktails. By Tapas, I don't mean patatas bravas or gambas pil pil, Portuguese have their own native version, actually called Petiscos. Although a lot less well known then the Spanish counterpart, I actually liked it a lot more. We enjoyed cod and saffron samosa, aubergine steaks, octopus with sweet potato and Alheira (bread and meat sausage). These are all small plates like Spanish tapas, but the variety and influences in their cooking is a lot more more diverse and interesting. 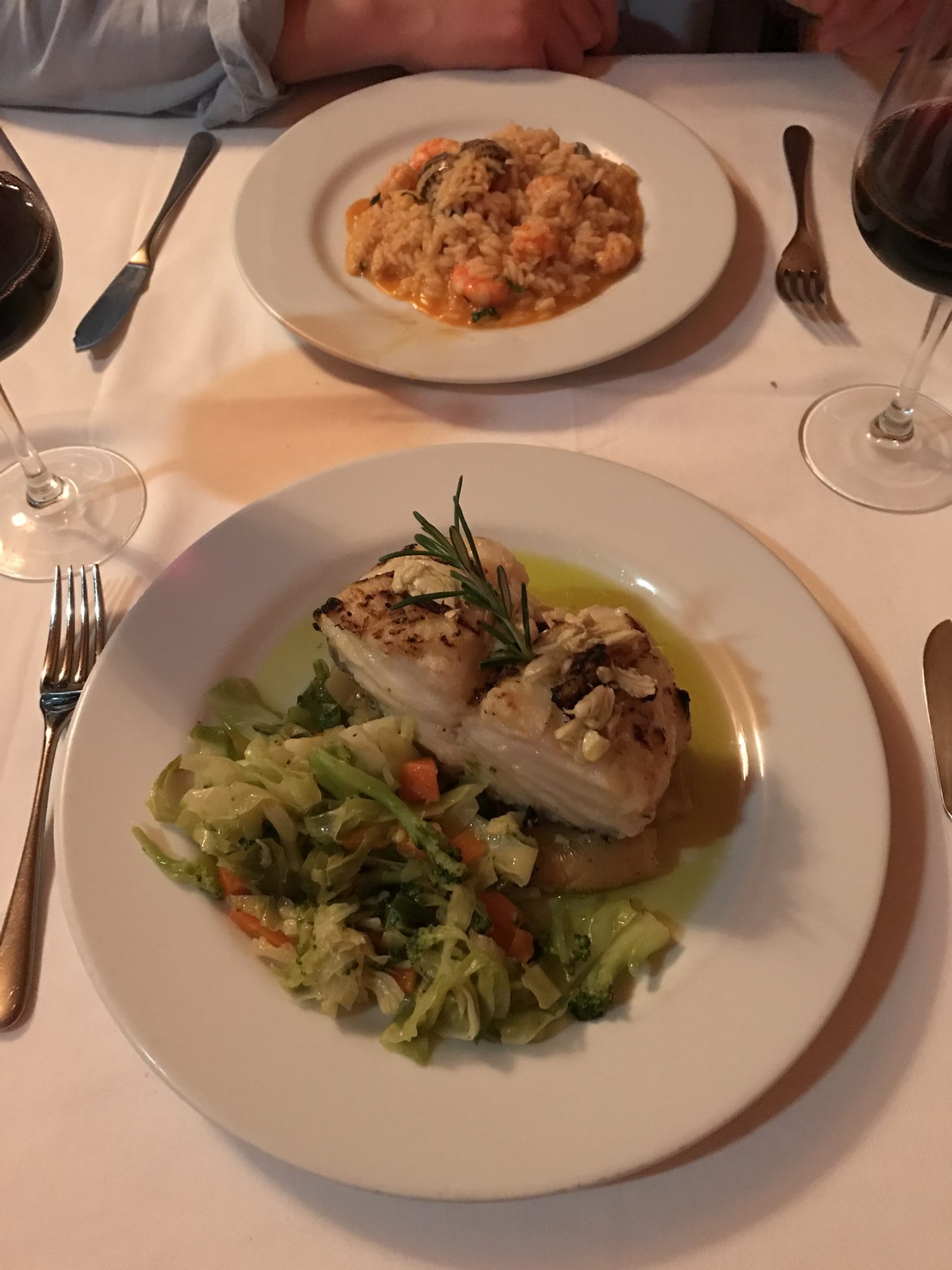 On our final night we planned to go to Zapata, a really well known restaurant very close to where we were staying, but unfortunately it was full so the hotel staff recommended Castro, which was one of their favourites, and even called up and reserved a table. On arrival i knew it was good, it was full of Portuguese as well as a few discerning tourists like ourselves and the staff were very friendly and really looked after us. Serving up traditional dishes like Arroz de Gambas; inbetween a paella and a risotto with a delicious rich sauce and juicy prawn. I had the Cod (Bacalhau grelhado à lagareira) a very traditional Portugal dish and i've never tasted anything like it. It was a huge piece of fish, baked in the oven in the most incredible buttery sauce with perfectly cooked vegetable to accompany it. Delish.

I hope this has given you a taste for some of the culinary delights Lisbon has to offer. There is a lot of sea food and fish which is very traditional given that it's a costal city with a huge harbour. However, there are loads of places elevating the traditional dishes with modern twists so don't worry if you're not a huge seafood/fish fan, there is plenty of choice. In terms of price, everything is very reasonable. You can get beer or wine for €2 in Barrio Alto and we never paid more than €25 each for dinner and that was including wine and dessert.

Part dois, covering my shopping exploits and some cultural essentials, is here